On the of 9th of February 2017 Alfa Chicks in conjunction with BEE Hive Enterprises held a farmers day in Maseru for approximately 60 small and developing farmers. Considering the logistical challenges that farmers in that region face they still managed to attend the event. A big thank you to Brendan from Cobb South Africa and Karel from Bitek Biosecurity who gave presentations on management and biosecurity aspects respectively. Also, a special thank you to Mr Notsi and his team for arranging the venue and advertising the event in Lesotho.

The event was well attended mostly by female and older farmers. We were also pleased to see some younger generation farmers there who were very keen to learn. The interaction between the speakers and the farmers was very good and the translators did a fantastic job ensuring that everyone understood what was being taught/asked.

The commitment to learning and the thirst for knowledge displayed by the farmers was very encouraging and we believe the knowledge obtained will result in the farmers improving their operations and ultimately their bottom line! We look forward to our next encounter with the farmers of Lesotho.

Mr Notsi supplies many farming inputs to farmers throughout Lesotho. 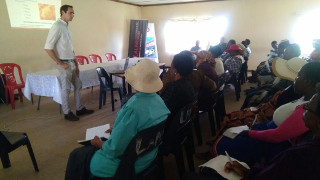